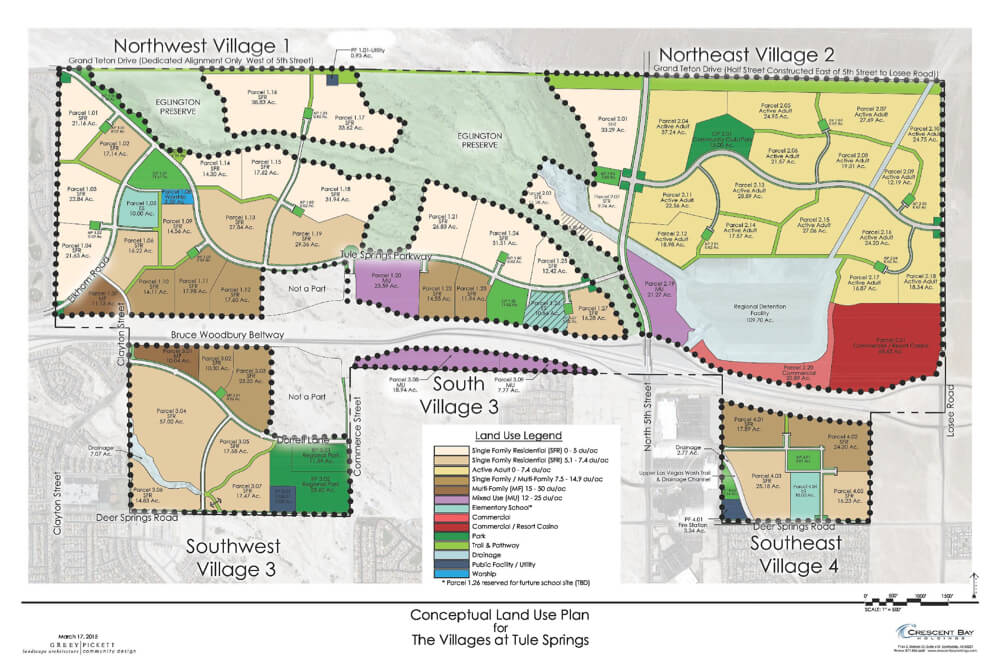 With so many new construction developments in the works around the Las Vegas area, it’s sometimes hard to keep track of everything that’s going on. But given the magnitude of the roughly 2,000-acre North Las Vegas housing development dubbed Villages at Tule Springs it’s hard to overlook this massive new community.

Expected to break ground late this month, Village at Tule Springs will be the largest master planned community to be developed in North Las Vegas since the beginning of the recession that started back around 2009. When finished (in the next 15 to 20 years), Villages at Tule Springs will have more than 8,600 homes, which will include 2,000 homes that are reserved for active adults 55 and older.

According to both developers and reports about the community, Villages at Tule Springs should be somewhat comparable to both the 2,200-acre Cadence community over in Henderson, and the 1,700-acre Skye Canyon community in northwest Las Vegas.

Named after the nearby Tule Springs Fossil Beds National Monument, the impact the Villages at Tule Springs development will have on the community goes far beyond housing. Over the next 15 to 20 years, the project should create about 24000 jobs while pouring in right around $3.3 billion into the local North Las Vegas community.

As for housing prices in Villages at Tule Springs, expect residences to start around $200,000 and go up to $750,000, however a precise breakdown of how many homes will be in each price point is still unclear. And in addition to its 8,600+ homes, the community will also feature two elementary schools, a fire station, a police station, a commercial shopping center, and right around 97 acres of public park space.